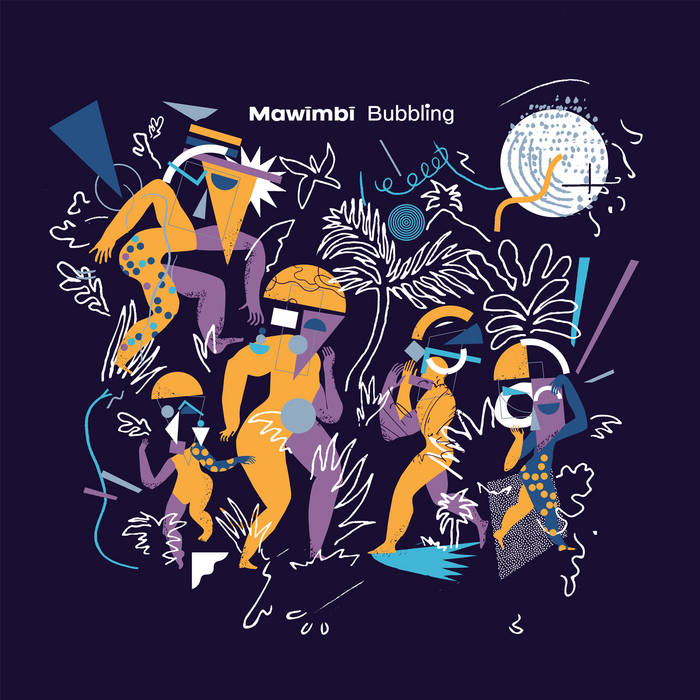 Eight years deep into their existence, Paris-based Mawimbi are proud to present their debut album “Bubbling”. Through their own label and events, the collective have championed up and coming artists who look to fuse african music with the modern dancefloor. They’ve released records from Lya, Onipa, Afriquoi and James Stewart and brought established artists and fellow travellers to such as Auntie Flo, Africaine 808, Awesome Tapes From Africa and Esa to Paris. Now it’s time for the collective to unveil their identity as producers and musicians in their own right.

“Bubbling” refers to the many ideas, encounters and projects that the collective have come into contact with over the past years. Through their events and their work as label curators and remixers (for artists such as Oumou Sangaré, Blick Bassy, Cerrone, Onipa), Mawimbi have become known as ambassadors for “afro-electro” - whatever that might mean - and their debut album buzzes with the contagious energy of the music they love. If you ask Mawimbi, Afro-electro is about global and local inspiration, from both sides of the Black Atlantic. It’s about paying tribute to the forefathers and the brothers and sisters in arms across the world. Afrobeat, highlife, South African bubblegum pop, Malian music, maloya… “Bubbling” seeks to connect geographically separate but spiritually similar club sounds.

Hence “El Caribe” (feat. Ghetto Kumbé) is half cumbia, half Carribean dancehall, while “Ngana” (feat. Fatim Kouyaté) has some elements of dub music and “Kakraa” (feat. K.O.G) nods to disco‐infused Ghanaian productions from the 70s. Despite the influences, this is a record designed for home-listening, a nod to our present circumstances, but also a deliberate step away from dancefloor. A moment of patience and reflection as much as joy and celebration.

Above all, “Bubbling” is a personal record, about unexpected cross-pollinations and the collective’s individual explorations of these musical territories. Mawimbi's own history is one of coincidences and chance encounters, and so is “Bubbling”. All the collaborations were born out of the connections made over the last 8 years. A WhatsApp chat with Zambian artist Mufrika, a spontaneous studio jam with Ghetto Kumbé in a Parisian Basement: these are captured moments of real, vital connections made.

Like Mawimbi itself, “Bubbling” is a collage of relationships and shared experiences, shaped by nascent friendships and musical encounters. It’s a truly DIY document in that sense, the sound of the last eight years of the Mawimbi adventure: free spirited, passionate, warm and generous.